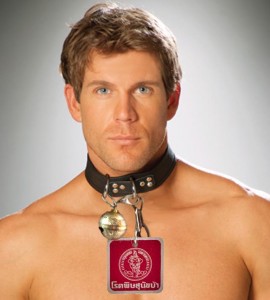 Reports from credible sources within the Ministry of Administrative & Micromanagerial Affairs (MAMA) suggest that authorities are planning compulsory rabies shots and tagging for all expats living in Thailand.

The stated aim of the  Livestock Development Department to eliminate rabies from Thailand by 2020 has prompted the measure because it is widely believed that so-called Farangs frequently carry the virus. The LDD is expanding it’s program of immunizing Bangkok’s pets in order to meet the 2020 deadline and soi-dogs, Farangs and other street-life cannot expect to be exempted. “It’s for the good of the nation!” a drunk on Soi Cowboy explained.

An unpronounceable source at MAMA told TDN “We think expats will find the tags attractive and comfortable to wear, especially for the ‘handsum-man’ about town”. He added, “It will become a badge of honour, ensuring expats in Thailand are always treated with the utmost respect and fairness.”

The small red badges attached to the collars of domestic pets are a common sight in Bangkok. It is expected they can easily be scaled-up to ‘Farang-size’.

The source also revealed that research at several bars in Patpong, Bangkok indicated that Farangs like to wear collars. “A little bell would be useful too, so we can hear them coming” a doorman at Patpong’s BarBar Fetish Club confided to TDN.

A world-renowned blogger on Thailand put down his drone remote-control long enough to comment “Cool, I will definitely get one. Have you seen my drone..?” 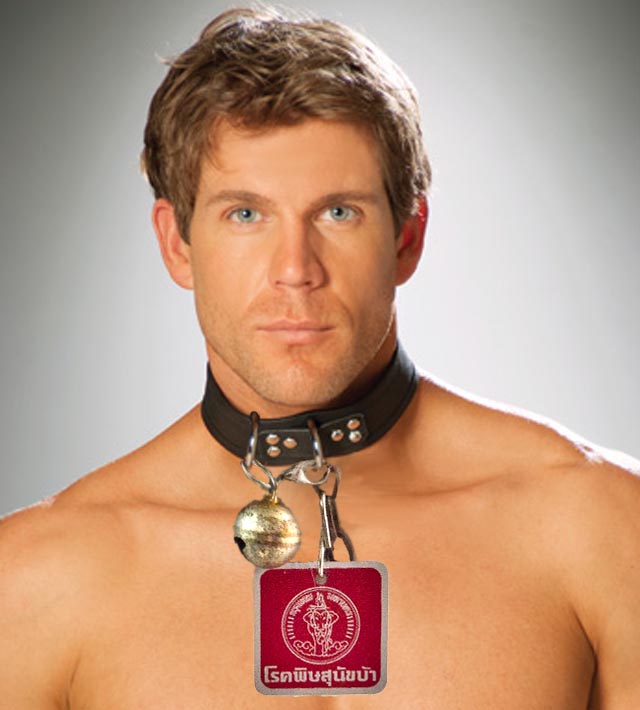