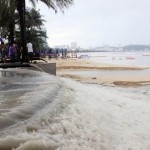 A new water feature has been installed on Pattaya beach to attract tourists away from stale old tourist hotspots like Niagara Falls.

As usual the Pattaya’s cynical press representatives have labelled the feature as an unintended consequence of poor planning – and even worse execution – of projects to improve the seedy resort’s image.

The city’s new chief Reverse-Spin Engineer, Aimarite Kowbpoi told us “This is literally a windfall waterfall. At first people did not understand the strategy behind the decay of beach-front improvements, but now we have this wonderful water feature we can reveal that we planned it this way all-along.”

Beechbum Sukstobeeyoo, head of the Pattaya Jet-ski Consortium, welcomed the feature. “Riding jet-skis down the waterfall will make it a good deal easier for drunken customers to wreck their rentals, meaning we don’t have to fake the damage ourselves.” He added, “Of course genuine repairs will mean prices will have to go up…”

On Friday, itinerant Farang Piotr von O’Reilly-Smyth became the first person to go over the falls in a barrel. To be fair, he’d been living in the barrel on Beach Road for several months and didn’t really have any say in the matter.

It is hoped that eventually Pattaya Falls will get its own hydroelectric power plant and begin generating enough electricity for the whole of ASEAN. 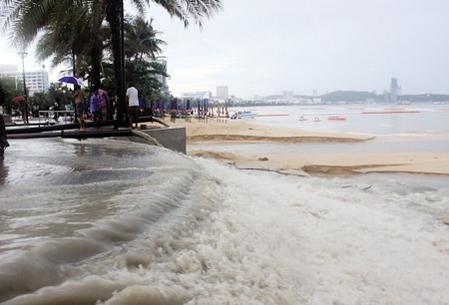