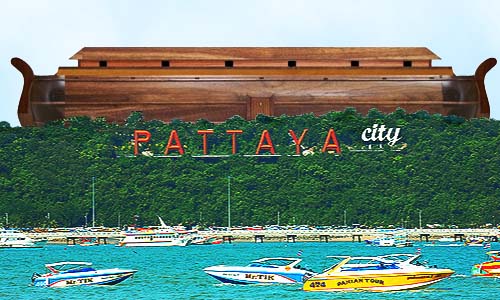 Pattaya is suffering the worst flooding since literally days ago. Government and local authorities are scrambling to resolve the situation with a number of strategies described by local ‘experts’ as  “half-arsed”

In order to help Pattaya deal with the crisis the Junta has authorized free screenings of the Hollywood movie “Noah” at all cinemas on high ground. “I know we wanted a big clean-up in Pattaya,” said Dooassaissay Nottahssaidu, Vice Admiral in Charge of Morality and Currency Smuggling, “but letting hundreds of ladyboys get washed out to sea was not what we meant”

One of the major problems seems to be that the newly installed beach-front promenade has dissolved. Pattaya City’s Chief Engineer Aimarite Kowbpoi admitted, “It may have been a mistake to use water-soluble cement on the beach-front walk, but the contractors guaranteed it for as long as they were in business.” A representative of the main contractors, Bottchitt and Wrun Inc. explained, “We genuinely thought it would last long enough for us to get at least as far as Laos.”

As a last resort, the mayor of Pattaya, a student of British history, attempted to hold back the tide by seating himself in a deckchair on the beach and shouting at the sea. Unfortunately he was forced to move on by a Cambodian migrant worker before the latter-day Cnut could exert any noticeable effect.