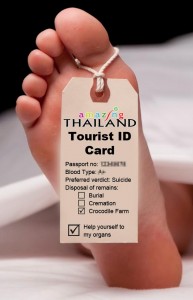 Thailand’s Tourism and Sports Minister Kobkarn Wattanavrangkul said on Tuesday that identification wristbands would be distributed to tourists following the murder of two British backpackers earlier this month that has raised fresh concerns over tourist safety.

The Ministry of Misinformation has released a statement suggesting that it might be more efficient if tourists were to simply pick up their own mortuary toe-tags on arrival the the airport. “It would make life much easier for our overstretched police force who are spending much of their time dodging army patrols.”

Phuket’s Minister of Crime, Wongagayn Fugwitt, has welcomed the idea of novice tourists wearing visible identification. “It’s sometimes difficult for Phuket’s crooks to tell the difference between pasty-faced first-time tourists, who are easy marks, and the sallow-skinned hardened expats who only come out after dark around Patong’s bar area.” the crime lord said. “It would be nice,” he added, “if they were luminous too as Dear Uncle’s edict on illumination has not yet reached the beaches here.”

Meanwhile Kobkarn just kept digging: “The next step would be some sort of electronic tracking device but this has not yet been discussed in detail.”

It is hoped that tourists who stray outside red-light areas could be quickly apprehended and herded back into their ghettos.

Electronic tagging of domestic animals is a common practice in the West and Thailand has many veterinary surgeons who are well-qualified to carry out tagging of  tourists. 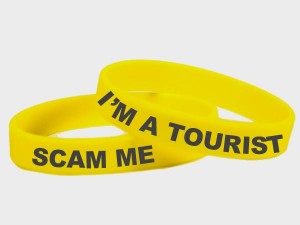 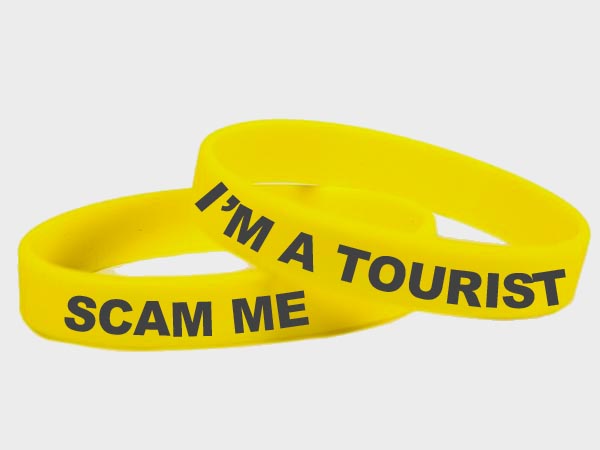