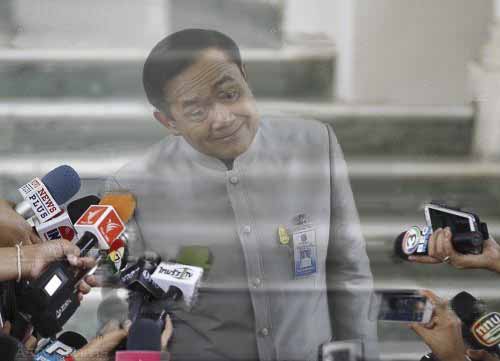 Staff at Thailand’s Government House are fighting a losing battle – against a ghost.

The spirit known to Government House staff as Pee-Em (พี เอ็ม) is frequently sighted in the Press Area where he addresses gathered media with unauthorized stories and off-the-cuff remarks. Credulous Thai media report these sightings as official Government policy.

“Pee-Em is a mischievous spirit,” the Junta’s Ghost-Wrangler General Sakoobeeduu Whairaryoo explained to us. “Possibly the ghost of an ancient inhabitant of the site, judging by his traditional – if gaudy – prarajathan shirts. We try to make it difficult for Pee-Em to get access to the press, but he keeps slipping by us.”

“The trouble is,” General Sakoobeeduu continued, “Pee-Em tends to speak casually and at length without ‘guidance’ from officials on matters of national and international concern. The simple-minded press, who seem drawn to him, report his words as if they were government policy rather than ideas from hundreds of years ago.”

But Pee-Em is not just a benign nuisance to civil servants, he has a temper. At one ‘press séance’ he threatened to throw a ghostly podium at a reporter who cheekily asked him if he knew any good exorcists. Another time he said he could have had a reporter killed already if he were really angry.

Pee-Em’s short temper and well-fed appearance has led people to suggest he may have been a senior army officer in a previous life.

Junta Spokesthing, Lance-Bombadier Maotpeet told us, “The  Government does not believe in ghosts and we have definitely not engaged an exorcist to come in on Thursday at 4pm and get rid of this non-ghost.” He added, “We have certainly not paid him 25 million baht in advance for the day’s work. Absolutely not. Never happened.”

So, are Pee-Em’s days at Government House numbered, or will he continue to torture the Thai Press Corps into 2016 and beyond? Only time will tell. 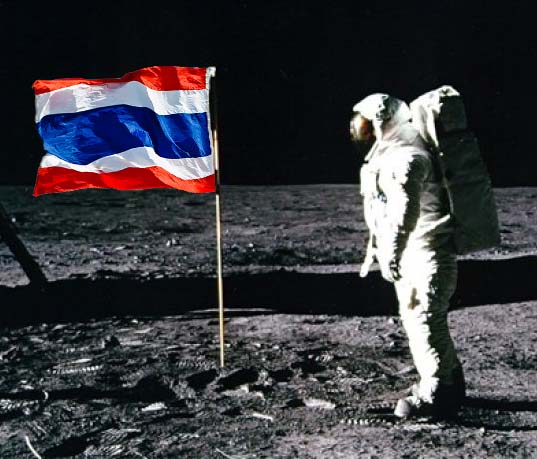 Scholars have expressed disquiet over a new history book being issued to Thai schools: “The Very Good History of Thailand and those Parts of the World Not Yet Thai.”

Some have questioned whether Thailand did in fact win the second world war, while other authorities have cast doubts over one author’s suggestion that both Jesus and Ghandi were born in Kohn Kaen and went to school there… together.

Education Minister and part-time stage magician, Professor Colonel Gotthit Wongagen, stands behind the new text. “Surely no one can question that the deciding factor in the Battle of Waterloo was the fact that the Duke of Sandwich’s Thai elephant was superior to Adolf Hitler’s inferior Indian elephant .”

“For too long” the professor foamed, “foreigners have been given free-rein to write history according to their own out-dated and wrong-headed ideas. It is our duty as Thais to explain to the rest of the world why they keep getting everything wrong.”

We tracked down the editor of the new text, an anonymous Burmese migrant historian and noodle-puller currently living in Petchaburi. He told us, through a Chinese interpreter, “We have used modern American historical research methods from Hollywood. The same research used to make documentary movies like ‘ One Million Years B.C.’, ‘Braveheart’, ‘U-571’ and ‘Harry Potter’. It showed us how to write history properly, according to our own special needs.”

Spokesthing Air Vice-Marshal Maotpeet is confident the Junta can address the problem of ‘alternate histories’ which may at times disagree with the book’s ‘proper history’: “We are asking social media companies like Facebook and Line to delete all posts made in the last ten years due to inaccurate data. We have every reason to believe they will comply. And” he continued “a team from the Ministry of Information Control & Eradication (MICE) has being tasked with rewriting Wikipedia.” 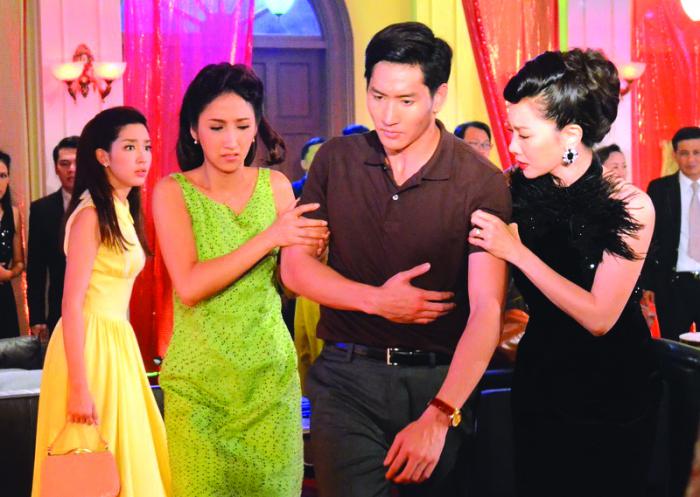 Thai Soap-Opera Reform on the Cue-Cards

Broadcasting standards organizations in Thailand are being lobbied by activists over their depiction of people eating non-rice-based products in soap operas. Considered one of the lowest strata in Thai society, soap opera writers have long been left to depict the darker sides of Thai nature on TV on the understanding that it keeps them off the streets. However now, when characters are routinely shown being forced to eat oat and potato products – eventually to learning to love them – Thai cultural watchdogs are voicing their concerns.

“Rice is the only acceptable staple for Thai people and the irresponsible depiction of oat-eating on these soaps is an affront to Thainess.” sobbed Aiyamathai Andhyuurnot, chairwoman of COCC-UP – the Committee for Cultural Cohesion – Under Prayuth. “It’s just not acceptable in modern Thailand,” she continued, “to perpetuate this myth that if you can just get a Thai to eat a single potato, they’ll never want to go back to rice.”

It seems the majority of ordinary sociopaths in the street agree with her. Recently a food vendor on a train out of Bangkok had to be rescued by transport police when a mob attacked him for trying to sell oatcakes. “This kind of thing shouldn’t be depicted on television because people will think it’s acceptable in real life.” said Rakkhao Makkmaak, head of the Rice Trafficking Board.

For some reason noodles do not feature in activists complaints, perhaps because they rarely if ever feature in soap opera plots. Dick Handcart, A well-know Thailand travel blogger and noodle-wrangler, told us “The idea that noodles, for example, are only made from rice is a nationalistic myth, promulgated to boost noodle sales in the 1950s. The real reason noodles don’t appear on TV is that they are impossible to eat without destroying 5hrs work in make-up applying facial whitewash.

Whatever the controversy, it seems the days force-feeding scenes on Thai soaps  are numbered and the Thai Army’s newly formed elite Scripting Unit are set to take-over the writing task.